There pictures shows the fermentation tanks in WEMAC's factory,the smaller one is the 500L jacketed tanks,and the bigger is 100BBL fermenter.For samll fermentation,The size and volume determine that it can be used in more places and is suitable for use in craft beer workshops such as bars and restaurants. For customers who are new to the craft beer industry or interested in beer brewing, you can choose a 500L brewing system. Equipped with a 500L fermentation tank, the investment is low and the capital returns quickly, and the equipment can be used profitably after it is put into use.

The fermenter shown in the picture is a tank body that is still under construction. At present, there is only one layer of board. The inner wall of the WEMAC fermenter is 3MM thick, the outer arm is 2MM thick, and the jacket is filled with polyurethane foam for insulation, which is embedded in it. There are cold water pipes, which are connected to the cold water of the refrigeration system to realize the heat exchange of the cold and heat cycle of fermentation refrigeration. 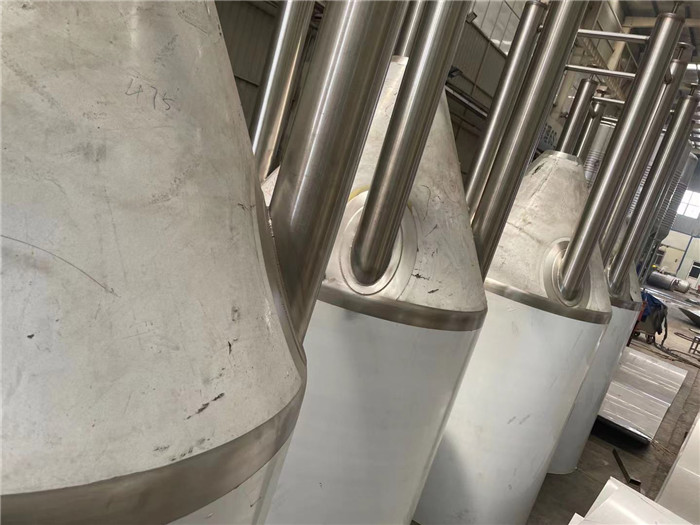 The honeycomb jacket structure refers to pressing a number of neatly arranged truncated cone-shaped pits on the jacket shell, and round holes are punched at the bottom of the pits. The jacket and the cylinder are welded together to form a honeycomb structure at the round holes.

The honeycomb jacket is usually called Miller board, which is a new type of high-efficiency jacket. This structure is widely used in the processing and manufacturing of container equipment due to its excellent mechanical properties and heat transfer performance. The Miller board of our company has high strength and reduces the jacket of the equipment.

In terms of heat transfer, the gap of the honeycomb jacket is smaller than that of the ordinary jacket, and the flow area is smaller. The flow velocity of the fluid in the cavity is significantly increased, and a large number of honeycombs play a role of turbulence in the jacket, and the fluid is flowing through the honeycomb. When point, the flow direction and flow speed are constantly changed to form a turbulent vortex, which accelerates the speed of cold and heat exchange and increases the energy transfer effect.