What is the brewhouse?

Brewhouse is compose of mash system.Mashing system is the brewing core of the whole set of equipment and a process responsible for making wort from malt. Namely: "mashing- lautering - boiling - whirlpool" four main process steps; These four functional steps are completed by several tanks, which are called "several saccharifiers". Hot water boiler belongs to auxiliary equipment.

How to choose brewhouse-Combination of mashing system

How to choose brewhouse-Introduce mashing combination 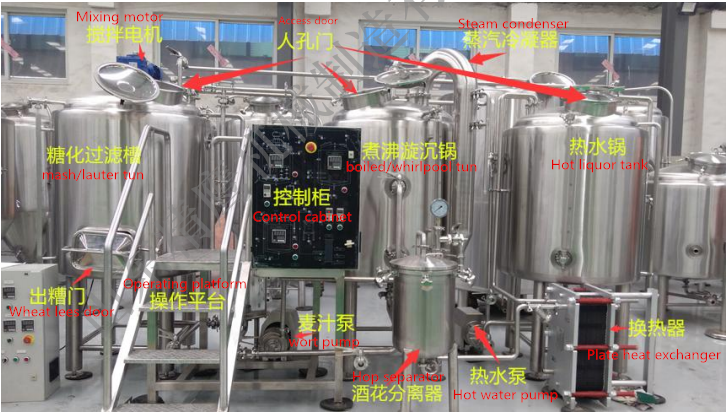 When purchasing beer equipment, the selection of "several saccharification vessels" or the type, configuration and size of saccharification is determined according to the site conditions, brewing process requirements and yield batch requirements. At the same time, consider the investment cost.

There are two saccharification processes for beer brewing: Decoction and infusion. Decoction is characterized by heating a part of the saccharified mash to the boiling point in batches, and then mixing it with the rest of the uncooked mash to raise the temperature of all mash to the temperature required by different enzymes in stages, and finally to the end temperature of saccharification. In the past, the quality of malt was general, and it was necessary to boil mash repeatedly to leach the soluble matter in malt. The cooking method is complex, time-consuming, energy consuming and requires high equipment configuration. Now the malt quality is good, and the saccharification process of boiling method is less used. The leaching method is relatively simple and time-saving. It is characterized in that the saccharified mash does not boil from beginning to end, only leaches various substances by the action of enzymes, and the wort still retains a certain enzyme activity before boiling.

The above process is the whole saccharification process. If you have any questions, please contact us for further discussion